On the final day, the flight back wasn’t until the afternoon. We left the airBnB early enough to leave time to go and visit the sights on Vagar (The island with the airport on it) before going to the airport.

The first stop off was the Trollfinger. It is signposted and there is a (very) small car park at the end of a very pot-holey road. Then there was a path to the view point. All very nice and easy to get to.

The second stop off was at the Nix horse statue. A nix is a water creature that can transform into any shape.

The third and final stop off was at the waterfall from earlier in the week – where there was no mist! Hurray!

And then it was back to Edinburgh and back home!

This was the second attempt to get to Kalsoy, the first day we had got up for the 8am ferry the day before but decided when we got there that the weather wasn’t great and we didn’t want to waste a trip.

This time the weather was much better, but we were unsure if the hike would be free or not. Some reports on the internet were saying you had to pay for it, some were saying you didn’t…. so we just turned up and hoped for the best.

The 8am ferry was pretty empty – as you would expect. I think the ferry can fit about 17 cars on it, but that is a close fit! There were about 7 cars on the outbound ferry.

We drove to the top of the island, and saw a message at the start of the hike – it said to be careful and enjoy the hike and if you enjoyed it to leave a donation in the box. Hurray! It was a free hike (with optional tip).

The hike was easy, although really muddy in places. You hike around the mountain not over it, so it was pretty straight forward as there is a clearly visible route to follow. The sign at the start asks that you stick to the path.

When we got to the lighthouse it was super, duper windy – so windy that I couldn’t walk out to the view point to take the photo I wanted! We walked back and visited the other two villages on the island, before heading back to the ferry port queue.

The ferry times are odd and the ferry’s stop going from the island at 1020, and don’t start again until 310, so we had a bit of a wait! We were in the queue for about 12, and by 1 it was clear there were more than 17 cars waiting for the 310 ferry – so a trip to Kalsoy is a trip you have to plan!

On the second day we had paid to go on a hike to Drangarnir. This hike has been closed to the public by the landowner, and the only way to do it is to pay for an approved guide to take you on either Wednesday, Saturday or Sunday.

The hike across (You walk around the edge of the cliff rather than over the top) wasn’t too great in terms of views. This could have had something to do with the mist, or maybe not. However when we hiked up the first cliff and got to the top… We could see the sea stacks – hurray!
We had a mini break to take some photos and have a snack before carrying on the sea stacks.

The closer we got to the sea stacks, the more the mist cleared. Eventually a bit of blue sky broke through.

We got to spend enough un-rushed time around the main view point that we could grab photos and have a bit of a rest.

For the way back we got to go on a boat!

By the time the boat had returned to the harbour the sky was totally blue! We decided to go to try and see Múlafossur Waterfall, which was on the same island and only about a 10 minute drive away.
When we went through the tunnel and came out of the other side…. It was soooo misty! The rest of the Faroe Islands was bathed in sunlight!

Despite the rather miserable weather forecast we decided to head out anyway. If we didn’t go out we would only end up sat in a house watching TV and that seems a bit pointless to pay to do so. With raincoats on, off we went into the drizzle.

By the time we had gotten to the start of the walk, the weather had cleared up and in places there was even some blue sky. At one point we could actually see Coniston lake, something we hadn’t seen all morning.

When we made it to the top it was so cloudy that we couldn’t see anything. Then we made a mistake, which was to try and get down using another route. In hindsight we should have just gone down the way we came, but we didn’t know that the cloud was hanging a lot lower on the other side.

It took an age to find the start of the side path down, and we were getting a bit grumpy by this point. I could hear rushing water and I suspect had the cloud not been so thick we would have seen some nice waterfall action. As it was we just had to be careful on the slipper stones as we made our way down.

After what felt like an age we made it onto a path and we could have kissed the ground we were so happy. What should have been a nice afternoon 3 hour hike had turned into a 6 hour mission, but at least the end was near – and we limped back to the apartment.

We made it out for pizza for tea. Had an early night then went home the next day because it was raining again!

After being bored for a bit, I decided to book an impromptu mini break to the Lake District.

Last time when I went on my own I went to Buttermere. This time I decided to stop at Coniston. First thing on the agenda was to drive to a pub near the Quarry and get some lunch, before then heading down to the quarry.

We then went to Tom Gill waterfall as we couldn’t check into the house we were stopping at until later in the afternoon.

The rain had stopped – hurray! And we went to a gorge. I do love a good gorge.

It was a nice walk up the gorge with some waterfalls along the way.

Once at the top we went up to the monastery and had a currywurst.

It was an Austrian bank holiday, so it was perhaps busier than usual for a Thursday in May, but still it wan’t that busy at all.

Day 3 is where the weather rook a bit of a turn and instead of glorious summertime like sunshine, we went to full blown April weather; rain, wind and cold!

Somewhat out of order in terms of blog posting! But! Better late than never…? On day 2 in Devon we went to Hartland Quays, and then to Speke’s Mill Waterfall.

Very nice it was there too. The walk from the Quays was pleasant, and then the beach was cool as well, some caves and the bottom of the waterfall and some interesting rock formations. 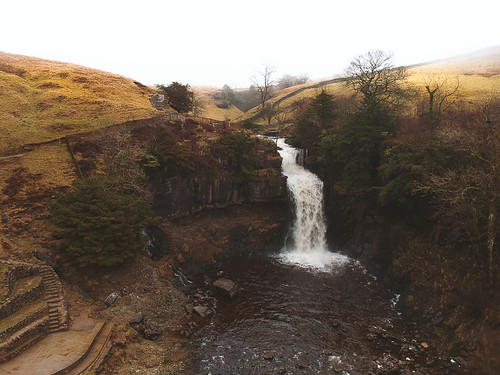 As has become a tradition, we go away for my birthday. It started when I turned 30, when everyone chipped in and we went to the Isle of Skye for 5 days. Last year we went to Malham in the Yorkshire Dales.

This year we went back to the Yorkshire Dales, but we went to Ingleton instead.
Ingleton has (a lot of other things I’m sure) a waterfall trail, and a cave system. 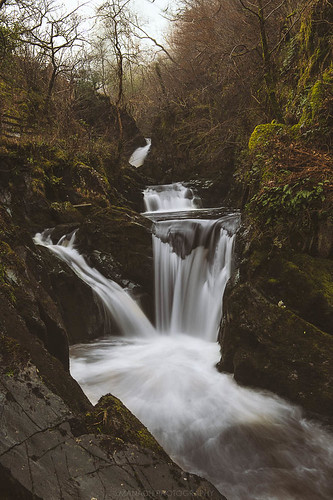 Even though I’d chosen it as my place to go, I didn’t really expect it to be much; there were no good pictures of the waterfall trail or caves online when I had a quick search, so my expectations were pretty low. 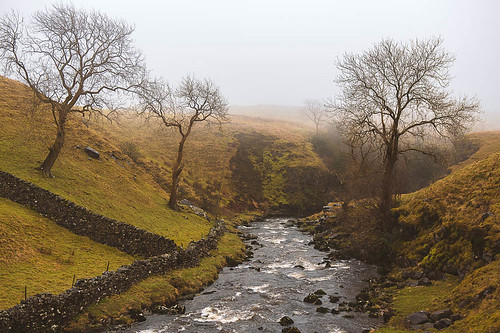 The week before we set off I printed out the Waterfall Trail leaflet, and was surprised when it said the walk was 2 1/2 – 4 hours. 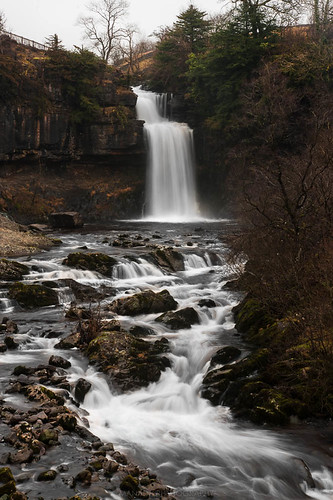 The weather forecast looked so poor on the run up that we considered moving the booking to the weekend after, but my gut said stay with this weekend, so we did. 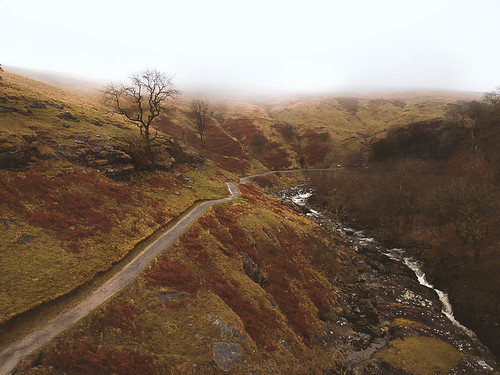 We drove up on Saturday morning, and as predicted, it was chucking it down with rain. By the time we got to the waterfall car park (it’s about a two hour drive). So with fingers crossed we set off on the circular walk. 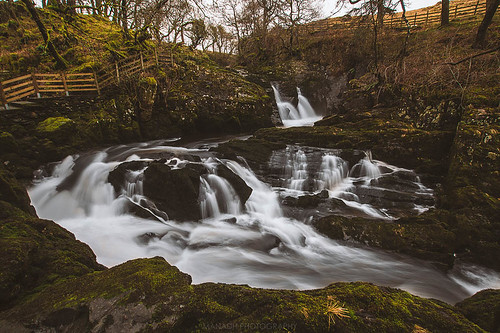 It was a fair walk before we saw the first waterfall, but it was a lot bigger an more impressive than I was expecting it to be. 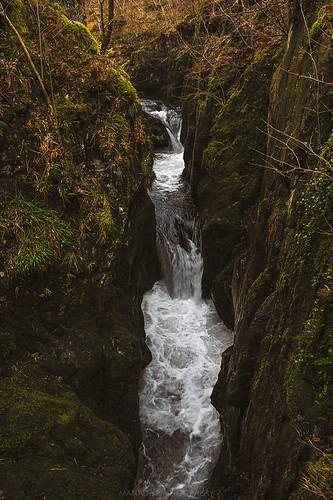 There was a clear path all the way around, and a places there were bridges built into the walk, so we walked right in front of the waterfalls in places. 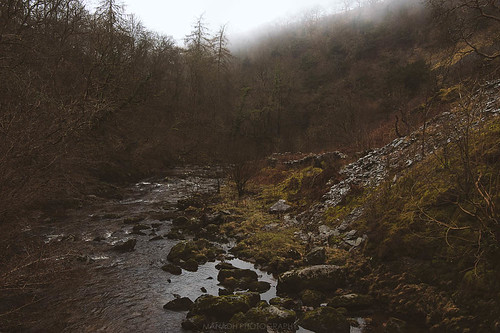 As well as walking around the river/waterfalls there were also chunks of the walk where we were in the hills. It was a bit misty, which I love. I love winter time; the grass is an odd yellow colour and the trees are bare, and add in a bit of mist and it is just perfect. 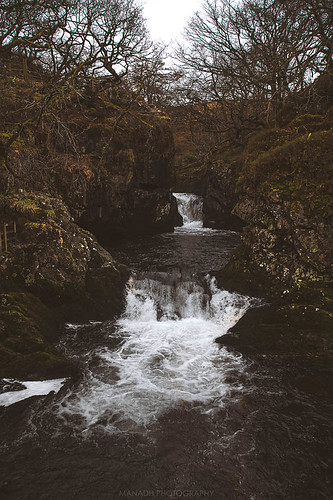 The walk has a lot of stairs in it, and most of the walk was on rocks so it was uneven. Even though it was advertised as strenuous and we scoffed at it, it was more steps and walking than either of us expected. 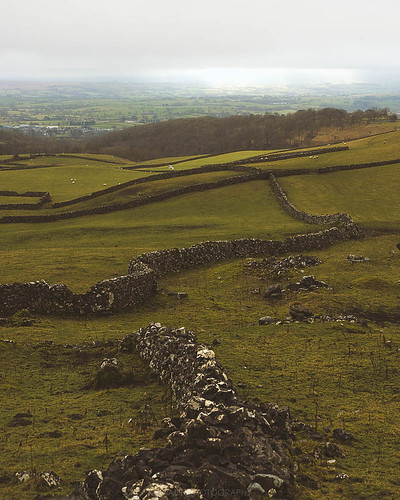 Having said that we made it around in 3 hours, even with various photo stops and drone flying stops. 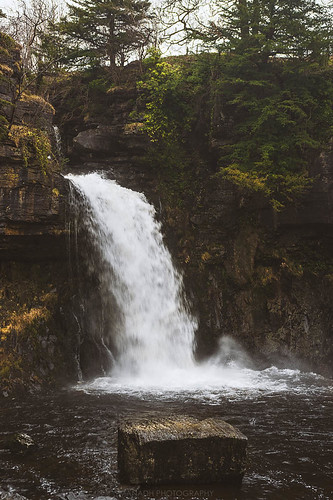 At points it was far too windy to fly my drone, and at other points there were a lot of trees and I didn’t feel too confident flying it. 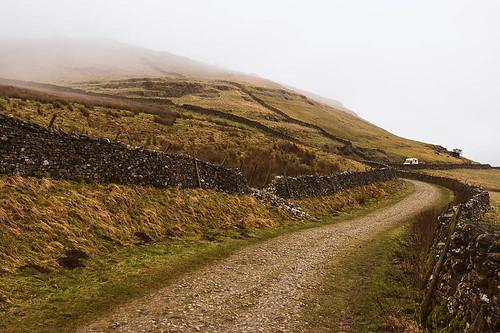 One of the waterfalls was in an open spot with some benches which was ideal for flying my drone, as it was also surround by hills. 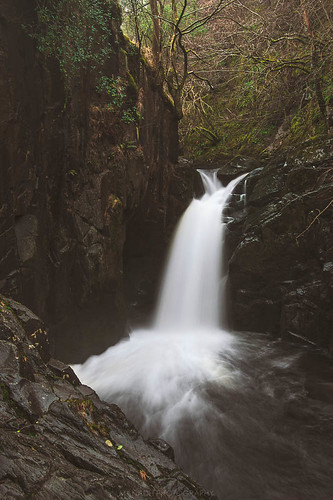 Once we had completed the walk we checked into the hotel and had tea. We were both tired so we went to bed really early. We’d been up since 730. 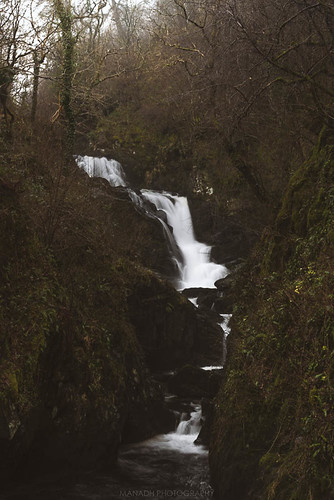 In hindsight, I probably should have popped out to see the viaduct before tea…