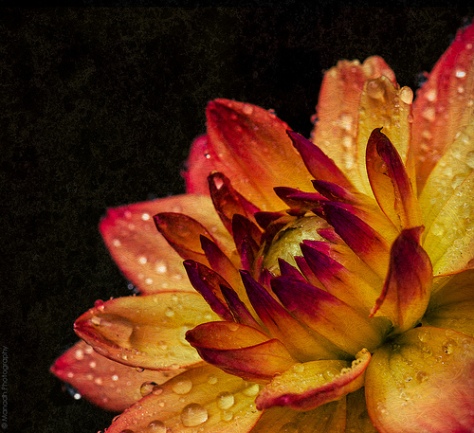 This year for whatever reason I have neglected my garden. Ironic given that we have had a really good summer but there we go.
Last week I went to a garden centre with my mum and bough quite a number of flowers, including lillies, pansies, violas, fushias, and two others which I’m not 100% sure what they are. They were all reduced too 😀 Bonus!

I believe today’s picture might be of a chrysanthemum but I’m not sure, and I’ve no idea what the other flower is because it didn’t come with a label on it. Turns out this is a dahlia – thanks mum!

I’ve decided today to take a day off of big edits and ideas. Instead I focused on being outside photographing this flower (something which I haven’t done in ages!) and working on more textures.
It was lovely to be outside being literally behind the camera rather than using a remote shutter; and it was nice to not spend ages editing.
I did however try something new in Photoshop with levels, as recommended by a project 365 friend on Flickr, so I managed to get two new things in there. Something new in PS, new textures I made myself.
I have 11 of my own textures now : )

I’ve decided that this weeks images will all start with ‘of’ – sometimes I hold back from doing things because I think it’s pretentious but I’ve decided to not be bothered. It wasn’t a concious decision but when I realised that this was the third image in a row which started with an ‘of’ I might as well see if I can keep the theme up until the weekend.

There is a massive part of me which wants to spell it ‘ov’ Behemoth style, but I shall resist…

2 thoughts on “Of summers beauty”